In the AFN flight school, you can obtain your private pilot license with a first quality training.

The course is one by one, that is, from the first day you will have an instructor just for you who will give you all the theoretical and flight training and who will be at your disposal from Monday to Sunday, as we believe it should be the school the one that needs to adapt to your availability when scheduling classes and flights (*).

The private pilot is an aeronautical license that will allow you to act as pilot-in-command on unpaid flights.

The course consists of two parts: theory and flight training.

(*) Always in accordance with the EASA Air Crew FCL regulations and with the AFN pilot school program.

The objective of the course is to train pilots holding a PPL (A) under the supervision of the head of education of an ATO at the level of theoretical knowledge required to obtain the commercial airplane pilot license.

The commercial airline pilot must pass a pre-screening exam at this school within six months of the beginning of the course.

The AFN Pilot School has designed this course for all Private or Commercial Pilots who wish to obtain Instrument Flight Rules certificate (IFR).

It will be necessary before starting the course, to be in possession of the Class 1 JAR medical certificate, to pass the theoretical tests of ATPL (A) or IR and to count with 70 hours of Pilot in Command and 50 hours of cross-country navigation. This course is available both in single and twin engine airplanes.

The Course for IR (A) in multi-engine aircraft, will comprise 55 hours of flight time of which:

NOTE: If the student holds a CPL (A) can make the 10 hours of instruction less, which means a total of 45 hours, but without variation of the twin-engine hours.

The Course for IR (A) in multi-engine aircraft, will comprise 55 hours of flight.

Once the training is completed, the candidate must demonstrate his / her proficiency in the simulator and in the aircraft in both tests of expertise performed in this ATO. (2 hours of examination).

The AFN flight instructor course lasts approximately three months, during which 125 hours of theoretical class and 30 hours of flight will be taught. As for the theoretical phase, the subjects taught are:

The student obtains, after passing the exam, oral and in flight, the instructor qualification for visual flight conditions.

The flight exam (flight test 2:00 hours) is not included in the instructional time.

OBJECTIVE OF THE COURSE

The objective of the course is to train the holders of an airplane license up to the level of improvement necessary for the issuance of an IRI (A) rating.

Pilots who have been or are holders of one of the ratings indicated below will not have to receive theoretical training:

The pilots who hold an IRI (H) do not need to take the course, except the briefing and aerial exercise 2 and the flight exam.

The objective of the course is to train holders of an aircraft license with at least 500 flight hours as an aircraft pilot to the level of refinement required to obtain the CRI (A) certificate for multi-engine airplanes of single-pilot.

The course will be constructed so that the applicant receives the appropriate training regarding the theoretical knowledge, flight and simulator instruction. Moreover, the applicant will be able to teach certificate oriented courses for any class or type of multi-engine airplanes of single-pilot in which he is qualified.

Pilots who have been or are holders of one of the ratings listed below will not have to receive theoretical instruction.

This is a theoretical course.

To access the course a private or commercial pilot license will be required. Students will be also asked to have a Class 1 medical certificate.

To hold a high school diploma or equivalent will be required. Alternatively, you may pass an entrance examination of AFN.

During the theoretical training the following subjects are taught:

Mandatory training for airport workers who need to obtain a definitive airport accreditation for access to a restricted security zone.
The objective is to develop solid skills for greater aviation security and to understand its regulations, concepts and best practices.

This course is recommended for all personnel of the air transport industry.

Aeroflota del Noroeste provides online training to obtain the certificate of drone pilots, open to the general public, highlighting among the first registered professional profiles such as: graphic journalists, publicists, filmmakers and film and television cameras, technicians related to surveillance or catastrophes, members of civil protection, among others.

The drone pilot training consists of two parts, a theoretical and a practical one. The theoretical can be completed in person or online.

To do the theoretical course online, you will be provided an access key to our platform that will allow you to see the syllabus and exercises. Once the course has ended, After the end of the study, an in-person lesson to solve doubts will be organised.

Once completed and passed the theoretical part we will proceed with the practical phase.

Give a class about Regulatory matters, knowledge of the aircraft (drone), aircraft performance, meteorology, navigation and interpretation of maps, operational procedures, communications, applicable aeronautical phraseology and human factors for RPA are taught.

On the other hand, the practical part consists of 4 hours more in which the student knows and demonstrates the use of drones.

The theoretical training of the course is teaching by the same faculty that trains future airplane pilots.

With this course you will be able to obtain the theoretical knowledge and the necessary certifications to use these unmanned aircraft, also called “Unmanned Aircraft” or “UAV” (Unmanned Aerial Vehicle) of up to 25 kilograms.

The pilot certification of “drone” will be essential to operate legally with drones. 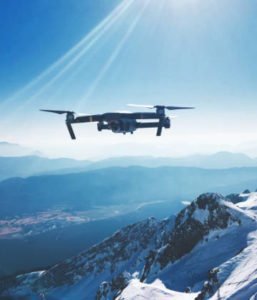 The “drones” are unmanned aerial vehicles, better known by their acronym in English “UAV” (Unmanned Aerial Vehicle), which allow the realization of numerous operations, such as the control of forest fires or traffic in large cities, but They can also be used to take pictures or videos so, as we see, they are not only used in industrial or dangerous jobs.

Also, “drones” can be used to locate people who need help or to carry out search tasks; All this combined with the fact that they are stable, can fly at low speeds close to the ground and, in addition, can be handled by a single person, make the “drone” a highly advantageous device.

Menu
We use our own and third-party cookies to improve our services and show you
advertising related to their preferences by analyzing their habits
navigation. If you go on surfing, we will consider you accepting its use. You can change
the configuration or get more information here
Privacy & Cookies Policy
Necessary Always Enabled